A surface can have a broad range of engineered functionality and resulting benefits.  The Olefins (ethylene) manufacturing industry and supporting suppliers invested heavily from the 1980s through to 2000 in advancing inert internal tubular coatings towards reducing/eliminating the formation of filamentous (catalytic) coke during cracking, focusing primarily on ethane feedstock.  NO tube coating brought to market lasted more than ~6 months in service in providing a surface with anti-coking benefits at the operating severity of even Medium severity crackers, typically <1,085°C end-of-run tube-metal-temperature.

In 2001, the state-of-the-art in coating and materials technology had advanced sufficiently to allow coatings with higher operating temperature limits, and the ability to mitigate both filamentous (catalytic) and amorphous (gas-phase) coke-make by:

The schematics below illustrate the concept of a coke gasifying coating through Quantiam’s pioneering catalytic coatings CAMOL™ (Catalytically-Assisted Manufacture of OLefins) WITHOUT (top) and WITH (bottom) CAMOL™.  An animation of CAMOL™'s functionality is shown below. 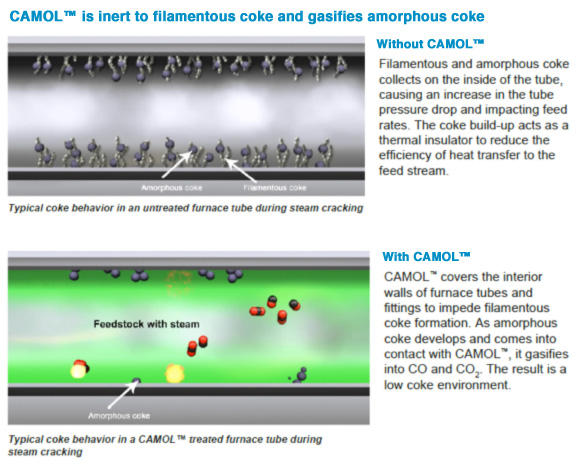